In 1981 a small group of Mayan leaders protesting the theft of their land and the ill treatment of their people by the US backed dictatorship in Guatemala marched to Guatemala City and occupied the Spanish embassy. Despite being urged by the Spanish to resolve this event peacefully, the Guatemalan government deliberately set fire to the embassy, burning it to the ground killing all of the protesters and embassy staff. This event touched off the government's two year campaign of genocide against the Mayan people known as the "Silent Holocaust"

The Guatemalan government, using the Guatemalan Army and its counter-insurgency force (whose members defined themselves as 'killing machines'), began a systematic campaign of genocide against the Mayan Indians, whom they claimed were working towards a communist coup. Working methodically across the Mayan region, the army and its paramilitary teams, including 'civil patrols' of forcibly conscripted local men, attacked 626 villages. Each community was rounded up when gathered already for a celebration or a market day. The villagers were then brutally murdered; others were forced to watch, and sometimes to take part. Buildings were vandalized and demolished, and a 'scorched earth' policy applied: the killers destroyed crops, slaughtered livestock and poisoned water supplies.


It happened March 13, 1982, two hours after Osorio had left his riverside village of Rio Negro to walk to a nearby town.
Ten army soldiers and 25 civilian militia members killed 177 women and children, including Osorio's wife and newborn child, who was slashed in half with a machete. It was one of four massacres committed over an eight-month period in the Baja Verapaz province village that claimed the lives of a total of 440 Maya-Achi residents.

advertisement | your ad here
Today, many villagers attribute the atrocities to their opposition to displacement by the construction of the 300-megawatt Chixoy hydroelectric dam.
"They killed us just for claiming our rights to our land," said Osorio, who lost 22 members of his family. "We said we didn't want to leave, and that is why so many people died."

Children were often beaten against walls, or thrown alive into pits where the bodies of adults were later thrown; they were also tortured and raped. Victims of all ages often had their limbs amputated, or were impaled and left to die slowly. Others were doused in gasoline and set alight, or disemboweled while still alive. Yet others were shot repeatedly, or tortured and left alone to die in pain. The wombs of pregnant women were cut open. Women were routinely raped while being tortured.

'I was 10 years old. The patrollers pushed me to the ground with some of the other children and we were told to stay there and keep our faces down. I tried to look up and saw my mother and sister in line with the other women. One by one they disappeared over the brow of a hill, and I could hear their screams. I could see my mother and sister approaching that brow. I was kicked and told to keep my head down. When I looked up again, over to the line of women, my mother and sister were no longer there. For two years a patroller kept me prisoner, but then I escaped.'

Throughout the period of the genocide, the US continued to provide military support to the Guatemalan government, mainly in the form of arms and equipment. The infamous guerrilla training school, the School of the Americas  continued to train Guatemalan officers notorious for human rights abuses; the CIA worked with Guatemalan intelligence officers, some of whom were on the CIA payroll despite being known human rights violators. US involvement was understood to be strategic  or, put another way, indifferent to the fate of a bunch of Indians.

In  1998 a report authoured by  the Catholic Church, titled 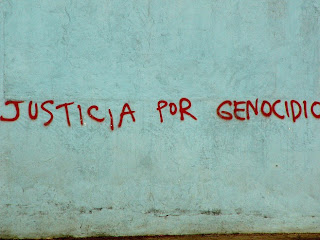 'Recuperation of Historical Memory' (also called 'Never Again'), was released,echoing an earlier report  'Memory of Silence' placed the responsibility for most of Guatemala's war crimes squarely on the army. The report was publicly presented by  Bishop Juan Gerardi; two days later he was murdered. In June 2001 a former head of military intelligence (a graduate of the School of the Americas) and two other officers were sentenced to 30 years in prison for the murder.

So the next time you hear or read of what a great man Ronald Reagan was, please remember the people of Guatemala  and the suffering inflicted upon them during his watch.
Posted by Kev at 8:18 AM