Be polite and maybe we'll toss you a few crumbs

That is the message being delivered to Canada's Indigenous peoples by the sons and daughters of white privilege that pass for Canada's punditry these days.
Whether it is Glavin, "The only serious question about Idle No More now is whether it will mobilize public support for the AFN agenda under its brand or undermine Shawn Atleo’s leadership altogether."
Coyne, "For the Prime Minister, then, the immediate objective, now and in the weeks to come, must be to bolster the credibility of Atleo and other modernizers as the legitimate voice of native Canadians — and to marginalize their fundamentalist opponents as unrealistic and unrepresentative"
or Murphy, "But, more worrisome is the tone, the ratcheting up of frictions, and the deliberate forgetting by some — hard as it may be in this moment to believe — of how much progress between natives and Canadians there has been" the message is clear, be polite little Indians and continue to work within the system that has so failed you and maybe just maybe mind you we might deign to throw you a few crumbs.

As Dr. Dawg pointed out this morning we have heard this message before directed at another people struggling to be treated as equals. 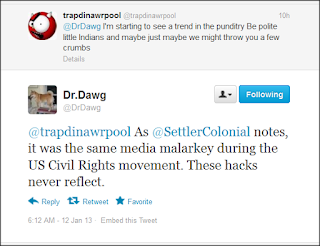 I should say though I don't mean this as an indictment against Chief Atleo and the Assembly of First Nations, they will in my opinion need to play an intrical role in any success this movement enjoys, but they will not, can not succeed without the type of pressure only #IdleNoMore can apply. People like Coyne et al crave but one thing and that is the continuance of the status quo, for they have profited mightily from it. They have a powerful platform from which to disseminate their views and there is nothing we can do to silence them. It doesn't mean however that we have to obey their words, so like that earlier movement pay them no heed.