This is our fault too

While Harper and his not so merry band are taking a ton of heat over their lack of response to the current refugee crisis, we should keep in mind that through our apathy we have allowed this to happen.

I'm likely being generous in blaming apathy for while it is a root cause we have also become as Alex Himelfarb writes, meaner as a nation;


Internationally, apart from freezing aid, our parliament recently said no to a bill promising cheap drugs to poor countries, choosing, as Stephen Lewis put it, patents over people. And when U.N. envoys criticize us, we are outraged, turning against the critics rather than asking how we might do better.

These changes cannot be justified on the basis of fiscal prudence.  Where there are savings, they are miniscule.  Increased incarceration and detention will create considerable costs.   While we all recognize the need for efficient administration, these changes put the burden on, thereby doubly victimizing, the weakest among us.  They reflect an indifference to those with less or, even worse, a view of people in need as shirkers and slackers.


What all this yields is a meaner Canada.   When governing is all short-term economic growth, damn the consequences, then aboriginal rights and environmental protections become inconveniences to be ignored or managed.   Refugees, the unemployed, and the poor come to be seen and treated as freeloaders, a drag on the economy, rather than fellow citizens, often victims of an increasingly mean version of capitalism.  And criminals are demonized, convenient scapegoats for our fears and discontents, the most heinous offences and frightening offenders used to blind us to the reality that those are people in our prisons, most of whose lives could be repaired.

Oh but you say I hate Harper and everything he stands for, yet our silence has allowed him to cheerfully take us to war more than once, contributing greatly to the current crisis. 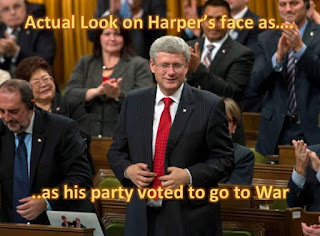 We were silent when they erected billboards in Hungary telling the oppressed Roma not to bother even applying for refuge here. 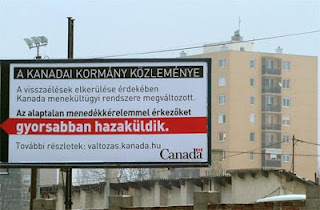 We were mostly silent when the Conservative government denied refugees access to healthcare labeling them as freeloaders out to abuse our kindness.

We have also been silent on the plight of refugees from our imperial misadventures until a child washed up on a beach. So while yes Harper and Co. deserve all the scorn they are receiving we need to be mindful that while outraged to an extent by these actions we were until these past few days not outraged enough to force our governments into action.

Whether it is apathy, meanness, a combination of the two or more, in the end Harper's failure is also ours. We can and must do better, perhaps one day living up to the myth we have created of ourselves as a kind and generous nation.
Posted by Kev at 10:45 AM