Nearly everyone who isn't rich is hurting economically these days, has been so for decades.

Governments in service of their corporate masters along with an assist from the media have used this to sell their low tax, small government austerity (for me and you) agenda. Many of it's victims have bought into the propaganda and will defend this system to the bitter end, however,  as the chart below shows their anger is directed at the wrong target. 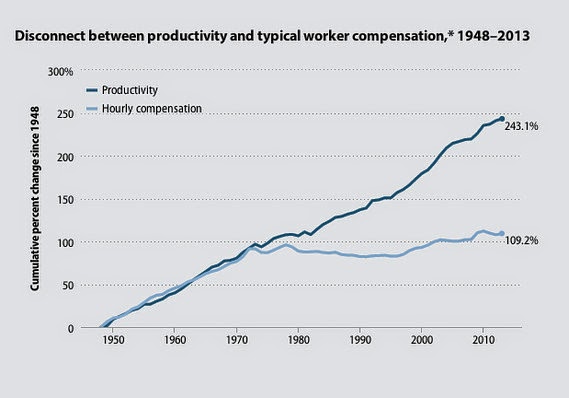 Clearly if we are to end this pain we have to focus not on the tax side of the equation but instead look to ending this cycle of wage suppression. Taxes appropriately levied are a public good that serve the great majority in ways often unseen. Wage suppression only serves those with wealth and power.

How do we turn this around? Well for starters we turn the minimum wage back into a living one just as it was before wage suppression was foisted on us, secondly we end this war on unions. This is a war fought ostensibly against unionism but in fact it is a war waged on all working people.

But most importantly we must stop voting for politicians and parties who support the neo-liberal agenda that has wrought so much pain wherever forced on a population
Posted by Kev at 11:39 AM